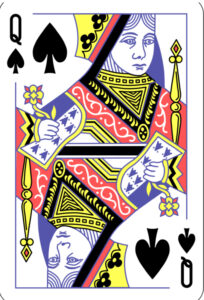 Lately I’ve been helping clients refine their practice culture via defining their core values.  Core values are non negotiable.  They serve as a guide for actions and define culture.

“We hold these truths to be self-evident, that all men are created equal, that they are endowed by their Creator with certain unalienable Rights, that among these are Life, Liberty and the pursuit of Happiness.”

In any business, consistency between values and actions result in cultural harmony. Conflicts, such as demanding that employees come in on time and then disrespecting their time by asking them to work through lunch or regularly asking them to stay beyond the stated closing time, undermines a productive, profitable and happy culture.

A conflict of VALUES and ACTION is being played out now, in SPADES.  America seems obsessed with the Royals and in particular, the Queen’s funeral.  Such an obsession is directly contrary to America’s founding core values.

We believe the all people are born with rights, not titles.  You worked hard to earn the title Doctor.  Should it be passed down to your children?

The Brit’s should be congratulated for separating Tyranny from their Monarchy, a process that began in the 17th Century and continued well into the 19th.  But the mere existence of a Monarchy however, runs contrary to American values.  It is what our founding fathers fought against and why the American Declaration of Independence and the Constitution are such exceptional documents, making America unique among all nations.

Queen Elizabeth II might have been an admirable person.  Her sense of duty and honor set an example few world leaders today can match.  But the idea that people are born into a ‘right’ is part of what the American Revolution was fought over.  And this ‘entitlement’ sentiment still lingers in much of the world.  And, based on the coverage and interest in the “Royals” here in the US, there’s an ember still smoldering here too.

One might admire a person behind the title such as Queen Elizabeth II and mourn her passing, but let us not confuse the inconsistency such a title conveys to the values of Equality, Freedom, Liberty and Justice.

In the Declaration of Independence, our founding fathers articulated the many faults of the Monarchy (King George III) from which they sought distance.  Even after the Revolution, they spent over a decade debating the exact form of government that would assure that such Monarchistic abuses be eradicated and prevented from ever regaining a foothold on these shores.

Our country’s founding documents are masterpieces of political and social engineering, the result of oppression that today, we can not fully comprehend.  And that’s why we must learn, respect and preserve the tenets they convey.   These documents are our birthright.  But they should not be taken for granted.  The freedoms and rights they enumerate are not entitlements but must be earned and protected through education and participation in the process of safeguarding their application, defending them from attack and preserving them as our legacy to future generations.

It seems incongruous that at the same time people are preoccupied with this Royal spectacle, some are discussing the illegitimacy of the Electoral College and the Supreme Court, institutions designed to help protect us from ever becoming a Monarchy or other form of tyrannical government.

Americans love British accents, admire the ‘pomp and circumstance’ and are enamored of “The Crown”.  Let us not forget that this is a remnant of a sometimes ruthless, colonial, repressive era where an individual’s effort was not nearly as important as their lineage. Let us remember that the mere existence of “royalty” goes counter to America’s core values.

As you (I’ll be tuned to anything else) watch the drama of a Royal funeral and King’s ascension, let’s keep things in perspective.  We Americans have it right.  All men (and women) are created equal and endowed by the Creator with certain unalienable rights, not titles.  It’s referred to as “The American Dream” for a reason.

P.S.  If you would like to refine your Core Values and Culture in your practice start by joining Coffee With The Coach.  This will say a lot about your commitment to your team and help you reinforce basic values that will support a positive practice culture.  Our upcoming Webinar is about TIME VAMPIRES.