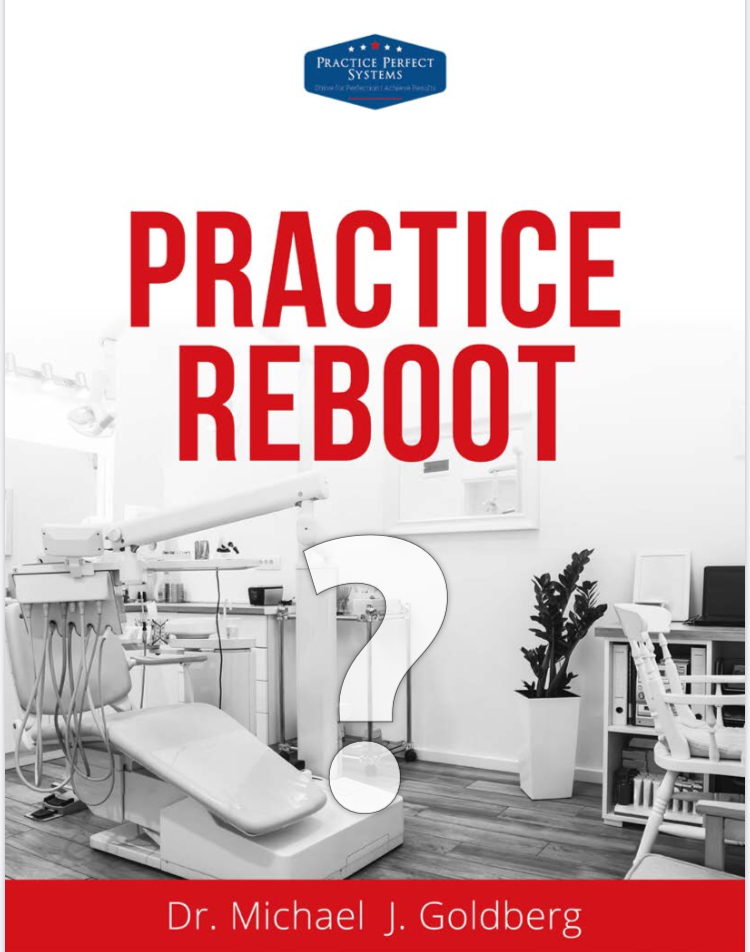 And, when I find that I’m in agreement with the ADA too?  That’s really unusual.

Last week, I wrote of the re-opening as a START-UP and not just a re-start.  It seems that I was more correct than even I had thought.

Not to worry, there’s always a silver lining and I’ll discuss that AFTER I reinforce the problem I discussed last week.

Opening your practice, presents a greater challenge than you, or I thought.  Last week, I maintained that it would be like starting up practice from scratch, even with your existing patients.

THE HOLE WE’RE IN

According to this week’s ADA survey, it’s actually worse.   Here’s part of their report:

“With 77% of respondents saying they were concerned about their personal health and safety during the pandemic, only 42% reported feeling confident that their dentists are prepared to prevent the spread of COVID-19 at their offices.”

The key here is that 58%, more than half your patients do not feel CONFIDENT that YOU are prepared enough to help prevent them from catching THE DREADED VIRUS in YOUR office.

So, unlike a startup which starts at zero, you are actually staring from a huge HOLE; -58%.

You need to rebuild the foundation of trust EVEN with your existing patients.

I’ve been here before.  A similar (but different) problem occurred in the 80’s, when HIV was a death sentence and transmission patterns and infection control processes were not yet fully appreciated.  There was also lots of fear mongering in the media aimed especially at DENTISTS.

During that time, my practice actually grew.

I routinely received new patients who were fleeing from practices that were perceived as “not clean enough”.

At the time, I was a Hospital Dentist.  I ran a GPR and I went into the OR to care for patients.

In 1984, I started to routinely communicate with my patients via a quarterly newsletter called “Word Of Mouth”.

As soon as I realized the challenges my private practice would face from the HIV scare, I faced it head on in the newsletter.  I also began sending out special communiques to my referring physicians, who were (and still are) the source of over 50% of my referrals.

I let these physicians know that I brought my infection control knowledge gained through my hospital and OR experience into my practice.

In short, I gained a reputation of being one of the safest dental practices around.  That paid off dividends for years to follow.

How have YOU been communicating to BOTH your patients AND referral sources?

WHAT have YOU been saying?

While academic and scientific based data might mean something to Physicians, they do not result in the same “feeling” in normal human beings.

Look carefully again at the ADA quote.  The term used was that there was a lack of  “feeling confident”.

For patients, this is not some scientific exercise.  It is not even rational.  It is a FEELING.

So, during the last week I’ve listened to and read all about WHAT the recommendations and “requirements” are for opening.  All of that is just fine but is mostly meaningless to the FEELINGS of over half of your patients.

Your job now, and I mean immediately, is to regain trust by promoting FEELINGS of security.

Remember this In grade school?  It might have been fun back then.   Now, its your livelihood at stake.  Actually, it should be more like “TELL AND SHOW”.

I would communicate, show and provide PROOF that you are going WAY above and beyond recommendations.  I would clearly state that YOU are treating your office as if it were a place that YOUR family, especially your PARENTS would been safe in.

Why your parents?  Because this virus is particularly dangerous to the elderly.  That is the level of care and safety that you should aim at promoting.

FEELINGS are very difficult to impact.  They must be met with overwhelming countermeasuresand in as many forms as possible.

You cannot do too much.

And, you have to communicate what you’re doing before you make a call to schedule an appointment.  Then, when they come, they have to be shown.

Your job is to EMOTIONALLY connect to overwhelm negative “feelings” and regain TRUST.

We all have our jobs cut out for us.  It starts with appreciating the challenge.

And, our staff is not immune to this feeling either!

Many of you and many of your competitors will not do what needs to be done.  It’s too difficult, it’s too costly, it’s too far out of most doctors’ comfort zones.

You can look at this as a burden or an opportunity; YOUR CHOICE.

I just urge you to CHOOSE WISELY.  We want to help you.

I will be giving a advice on HOW to do what you want to do on an AAPMD sponsored webinar this week, Tuesday, Cinco De Mayo.

P.S.  For a free EBook; PRACTICE REBOOT, go to: