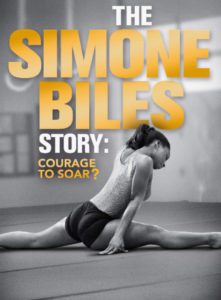 How can these three things possibly be related?

They are, and in a very profound way.  PERSPECTIVE!

This week all the talk, even in the Wall Street Journal, was about how Simone Biles, touted as a gymnastic GOAT (greatest of all time) faltered.  And more to the point, how she reacted after a failure on the world’s biggest stage, the Olympics.

The talk was about the pressures placed upon her from without and within.   Discussions of physical injury and even “mental health” followed from multiple media pundits.  Just the mere volume of media devoted to this says much about our society.

As visible and personally devastating as her failure was, what could she and we learn from the survivors of the Holocaust?

Surely nothing could have been as traumatic?  Surely a faulty landing cannot compare to the specter of torture, deprivation, and death?  Surely a personal and public embarrassment cannot be compared to being forced to watch a loved-one being humiliated, tortured, or killed?

When you’re going through any failure or personal challenge, it’s hard to get perspective.  It just hurts.  For Simone Biles, the decision not to continue to compete at these olympicswas personal and hence correct for her.  It’s the media that are making it the “story of the games”.

Having perspective, as you’re being inundated by the media must be truly challenging.  It might be too soon for her to gain the proper perspective.  But for us, there are lessons to be learned.

Stories abound of Holocaust survivors and their post war travails.  Some succumbed to the tragedy and led depressed and unproductive lives.  Those that adopted a victim’s posture became distrustful, angry, and unproductive.   Some tragically committed suicide.

But many survivors lived amazing lives filled with joy, contentment, and fulfillment.  I’ve had the privilege of meeting many of these ‘survivors’, as my first practice in Manhattan was in an area dubbed “Franfurt on the Hudson”, because of the many German Jewish families like the Kissingers, Wertheimers, Kahns, Westheimers and Breuers that resided there.  People with numerals on their arms were commonplace in my reception room.  The stories I heard still haunt me, like that of Ruth Gutmann (“A Final Reckoning”) and her twin sister who were experiment upon by Dr. Josef Mengle. Stories like those of Ilse Marcus, a survivor from the SS St. Louis, whose passengers were refused entry into the U.S., are etched into my mind, and propel me forward, towards a more decent and humane future.

Trudi Birger was a child when she and her mother were taken from a ghetto to the concentration camp.  Trudi survived and emigrated to Israel, where she raised a family with her husband, Zev.

For many years, like many survivors, Trudi shied away from speaking about her Holocaust experience.  She focused on raising her 3 sons and on her career as a microbiologist.

When she saw the extreme need for oral healthcare among the poor children in Jerusalem, she knew she had to do something.  So, in 1980, with the help of international dentists, mostly from France, she started the Dental Volunteers for Israel Clinic.

Only when Trudi had secured her future did she open up about her experience.  She found it easier to write about it than speak about it.  And so, with some help, she published a book; “A Daughter’s Gift of Love.”

Many survivors react similarly, refusing to talk about their experiences until later in life, when their future and legacy have been secured.  Only then do some allow themselves to go back and relive the horror, knowing that it can never happen to them or to their loved ones again.

I knew Trudi well, as she enlisted me into her army of international volunteers in 1983.  Her vision for DVI and her outlook on life were infectious.  I readily caught the disease.

Trudi passed in 2002 but her legacy remains.  Those of us who were fortunate to have been infected by her viral vision continue to maintain it.  We do so with reverence, a sense of mission and joy.

Reverence, because someone who had endured such unimaginable horrors had accomplished so much.  And joy from being able to help maintain what she has built and pay homage to her memory by keeping her vision moving forward.

The question is; what sets those who failed and got up and persevered apart from those who did not?

And here’s where the business linkage comes into play.  How many successful businesspeople had experienced near financially-catastrophic failure?

Probably most  have.  Elon Musk nearly went bankrupt with Tesla.  Many of his SpaceX rockets exploded.  Nearly every one of the “Sharks” talks about the lean years.  And they talk about it with reverence.  In 1985, Steve Jobs was fired from Apple, the company he started.  How’s that for humiliation?

Walt Disney is remembered for his amazing successes.  But did you know that he was once bankrupt and had a devastating mental breakdown?  What we now remember is Mickey Mouse and Disney World but there were some very dark times.  Most now think of Steve Jobs as Apple’s savior.

As with Holocaust survivors, a business failure, if left to be the defining moment of one’s life, can potentially become an anchor to that incident, dragging one down and keeping one from moving ahead.

The characteristics of those who survive and thrive include a focus on the future, not the past.  As Psychologist Edith Eger, another survivor wrote in “The Choice”, “suffering is universal, but victimhood is optional.”  She points out that we live exposed to circumstances beyond our control.  And she says, that ‘victimization’ comes from the outside, but ‘victimhood’ comes from within.

She warns of a particular mindset, “a way of thinking and being that is rigid, blaming, pessimistic, stuck in the past unforgiving, punitive, and without healthy limits or boundaries.”  People who fall into such a trap she says, become their own jailors.

In his book “Good to Great”, Jim Collins describes the Stockdale Paradox.  He discusses the mental attitudes of those prisoners of war during the Vietnam War who succeeded and succumbed.  As expected, the pessimists yielded quickly.  The surprise was that the “optimists” actually fared even worse.

It turned out that the optimists set unrealistic deadlines and expectations.  As deadline after deadline passed, they became crushed, defeated, and depressed.  The realists however who had faith that they would survive but focused on the now and controlled what little they could survived.  Admiral Stockdale was one, Senator McCain another.

I can’t even imagine what Simone Biles is going through now.  Few of us, gravity boundmortals can.  Nor could I imagine what a Holocaust survivor went through.  Pray no one will ever have to endure that again.  I hope that Simone is eventually able to put this incident in the proper perspective.  I hope she’s able to resist the temptation of adopting victimhood, and instead adopt a realistic vision of what her future can be.  Certainly, the inner strength that got her to this stage can be used for a greater purpose.

I hope she finds success in some area that gives her the security and the courage to look back at this moment as just a brief detour on a pathway towards a joyous and fulfilling life full of accomplishment and meaning.

“I swore an oath to myself in the ghetto, that I would do my best to encourage others and to live in hope. After the war, if l survived, I would help other people.”

I hope Simone can emulate Trudi, Steve, Edith and Walt.  I hope you can too.

P.S.  I have the privilege of being one of the honorees at the upcoming celebration of the DVI clinic’s 40th Anniversary.  You can share in Trudi’s vision of Faith, Smiles and Health by going to: https://americanfriendsofdvi.org/gala40/