Ron Popeil had a problem. The Chop-O-Matic (invented by his father) was so efficient at chopping vegetables, that door-to-door salesmen, common in the 50’s and 60’s, couldn’t carry enough vegetables to demonstrate it to enough customers.

That’s what led him to develop his first INFOMERCIAL in 1964.

But perhaps this “TV Pitchman” is best known for the catchphrase he invented to sell Ronco’s Showtime Rotisserie and BBQ, which his in-house, staged audience’s shouted for added effect;

The phrase has even entered our modern lexicon to refer to anything that is so simple, you just press a button, flip a switch, close the door, put it in your mouth, and everything takes care of itself. 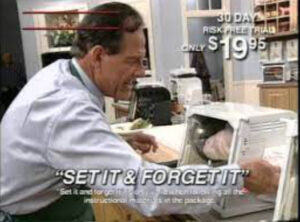 But few things, even the Showtime Rotisserie, are actually so ‘hands off’. In fact Popeil, who became somewhat of a legal expert, made sure to say “as long as you’ve followed all of the instructional material” before or immediately after saying “Set It And Forget It.”

Here’s the catch, and there’s always a catch. How many people actually read ALL of the instructional materials?

Most people hardly read at all. Instead, they might look at YouTube videos, which often don’t contain the dire warnings which the “instructional materials” have. Warnings such as; the risks of being burned, starting a fire, getting electrocuted and Salmonella poisoning are glossed over in such infomercials or video presentations. Even potentially deadly consequences are written in small print and hidden from plain view.

The instructions in the Showtime Rotisserie, specifically says;
“Please Don’t take “Set it and Forget it” ® Literally.”

How many people do you think read that, along with the list of 24 DO NOT DO’s?

These warnings aren’t enumerated until AFTER the product has been purchased and opened! Talk about ‘informed consent’!

Today, the allure and popularity of “Do It Yourself” healthcare products include the promotion and implied promise of “Set It And Forget It”.

How can YOU compete with that?

And, with the looming recession deepening, more people, even your current patients will be tempted to try the DIY products. Whether it’s a home-made night guard, sleep appliance, aligners, or pop-on veneers (yes there is: poponveneers.com), these products (even if all the instructions are followed) have the potential of causing massive damage.

DO NOT IGNORE THIS!

Ignoring that these options are available to your patients and are being aggressively marketed to them, in ways you cannot afford, is dangerous. Heck, there are even systems hawked that can “clean” one own’s teeth! Soon, the only thing left for dentists to do will be to remove teeth, place implants, and use the drill.

Face it, everyone is looking to circumvent us!

An effective strategy is to confront the matter head on. Acknowledge that these options do exist. Then, explain the risks involved, ALL THE RISKS!

The best way of doing that, without raising a person’s defensive screen, is via stories of real people who suffered damage from using a DIY healthcare product. If you have some, that’s great. Fortunately, YouTube can help here, as such stories abound (see link below).

Most dentists are non-confrontational. Many, dislike talking about negative outcomes. And, most offices are not very good at communicating to their patients other than for appointment confirmation and “you’re overdue” reminders. Programs such as Weave, Lighthouse, and others facilitate such communication, but it’s the content that really matters.

We have a professional responsibility to inform and protect the public, which our professional organizations and even dental boards, have failed to do. The least YOU can do is protect your patients from the potential dire consequences of “Set It And Forget It”, DIY products.

On this week’s Coffee With The Coach webinar, we’ll be discussing strategies to deal with the current and future economic issues. One of them is how to confront the DIY healthcare craze.

CWTC is aimed at the entire dental team, as having the entire team on board with the strategies and tactics discussed makes life so much simpler for the dentist/practice owner. Having the team on board is almost like “Set It And Forget It”!

Join Coffee With The Coach today and begin to immediately reap the many rewards.

To helping protect the public,
Michael

P.S. Attendees of our next CWTC webinar on July 22nd at 12 Noon ET, will get a free patient email ($750 value) to send out about the DIY threat. It’s just one of the many advantages of the program.

P.P.S.  A great YouTube video that discusses the pitfalls of DIY and D2C (direct to consumer) products is:https://youtu.be/Ogbo9Ny_y-g