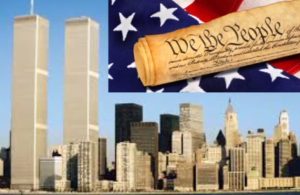 It was a Tuesday morning.  I was in the Columbia Faculty Practice on Madison Avenue, in Midtown Manhattan.  I’d already seen a patient who was dismissed.  As the treatment room was being set up for my 9:00 patient, I heard loud voices in the hall.  Our hallways were unusually large, wide and long, a terrible waste of expensive space, with echoing acoustics.  And the hallways were also usually empty at 8:46 AM, as few Docs started at 7:30 as I did, so the noise was unusual.  I decided to explore why.

The World Trade Center had been…hit???

It didn’t make sense.  So we turned on the TV through our computer.  I had no idea how to do that, but my IT savvy dental assistant Eaton, figured it out.  We saw the second tower get hit. We watched as they collapsed.

It felt as if we too were being pulled into the abyss created by the towers’ descent.  Hell had opened its maw.

Patients were rescheduled, staff sent home, mayhem ensued.  People wandered aimlessly in the streets of Manhattan.  It took me 6 hours to get home, which was only 11 miles away in New Jersey, as the George Washington Bridge and all the tunnels were closed.  America was under attack!

The following week, I was asked to provide dental records for one of my patients, David Berry.  As the stories of near misses poured in, the confusion grew.

I thought about how my father must have felt after Pearl Harbor.  His anger found an outlet in action.  He enlisted in the Navy.

How did this happen to the strongest country in the world.  Were we no longer safe?

I knew the threats.  In 1970, my hygienist had been hijacked on a Pan Am flight 93 and flown to Jordan, where the Jewish men were separated from the other passengers.  Her father and brother, who were sequestered, were patients too.  And, I treated many Holocaust survivors because Columbia Presbyterian, where I worked and practiced was in Washington Heights, home of many German Jews.  I heard some harrowing stories like the one Ruth Gutmann told me about her and her twin sister’s experiences with Dr. Josef Mengele.

I watched the 1972 Munich Olympics and the Achille Laurohijacking in 1985.  I volunteered every year in the DVI Jerusalem children’s clinic.  I knew of terrorism.

“But I’m an American Jew, in New York.  I should be safe from Nazis, terrorists or even Antisemites.  America would protect my Jewishness.”  That notion was shattered that TUESDAY, September 11, 2001.  Both of my identities were targets.

My personal peace and the entire world changed that day. We reacted but we didn’t learn.

We had a Commission.  Yet we didn’t learn.

I’m afraid the evidence points to the affirmative.  And, that was even before people, as they are now attempting to, rewrite history!

Why are we as a species so dumb?  Why do we have these self-destructive tendencies?

Jonathan Sachs proposed an explanation in his book “Morality.”  He posits that it’s because “WE” either focus on “I” or we too narrowly define “WE”.  Exclusivity has replaced inclusivity.  Individuality has replaced the Communal.  Extremism has supplanted Moderation.

We aggregate into groups instead of acknowledging that we’re all part of ONE GROUP, the HUMAN RACE.

We divide ourselves into ever smaller and smaller groups, each with their own special interest and perspective.

We have not learned the lessons of 9/11.  It still doesn’t make sense.

• More about WE than ME.
• More understanding
• More inclusive
• Less judgmental
• The best version of ME
• An example to others

Every 9/11 Eaton, my former assistant, and I speak and reminisce.  Every 9/11 my wife and I go downtown to see the 2 beams of light extending heavenwards.  Every 9/11 I try to make sense of the events and account for what we’ve learned.

Every year so far, I’ve been disappointed.  This one has been no exception.  In fact, it might be the worst in 20 years.  Maybe we’ve hit bottom?  I sure hope so.

It starts with me being more concerned with WE.

To our greater appreciation of the past towards a better future, 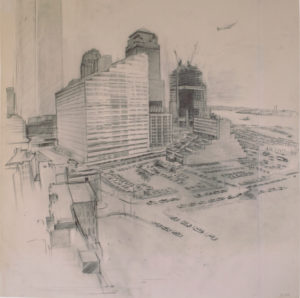 Rackstraw Downes:  view from his studio 1985