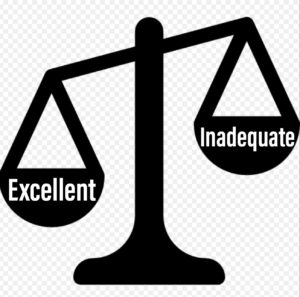 In his book Good To Great, Jim Collins dissects the attributes that enabled companies to move from good to great over a considerable period and through challenging times.

We all know of companies like Blockbuster, Polaroid & TWA, that seemed good, then great, and now…gone! Why?

Chaos, disruption, “Black Swan” and other unforeseen events are bound to happen over a long enough period of time. Collins points out that having the right leadership in place at such pivotal moments enables companies to survive. He refers to such leadership as “Level 5”.

With the confluence of Pandemic, Inflation, Stagflation (now) and Recession (upcoming), level 5 leadership can make the difference between ‘survive’ and ‘dive’.

Level 5 leadership is rare. Only 1 US President was such a leader; Abraham Lincoln had the dual attributes of WILL and HUMILITY.

Professional Will:
o Creates superb results, a clear catalyst in the transition from good to great.
o Demonstrates an unwavering resolve to do whatever must be done to produce the best long-term results, no matter how difficult.
o Sets the standard of building an enduring great company; will settle for nothing less.
o Looks in the mirror, not out the window, to apportion responsibility for poor results, never blaming other people, external factors, or bad luck.

Personal Humility:
o Demonstrates a compelling modesty, shunning public adulation; never boastful.
o Acts with quiet, calm determination; relies principally on inspired standards, not inspiring charisma, to motivate.
o Channels ambition into the company, not the self; sets up successors for even greater success in the next generation.
o Looks out the window, not in the mirror, to apportion credit for the success of the company—to other people, external factors, and good luck.

A level 5 leader will:
■ Do what must be done, no matter how difficult
■ Give credit for the company’s success to others, to external factors, and to good luck, instead of his/her own actions
■ Generate excellence in a company’s outcomes
■ Take actions to ensure the company will endure beyond his/her tenure

An example of how this plays out in real life involves decisions about employees. We often see a reluctance on the part of leadership to hold people accountable. Yet, Collins also points out that one of the primary traits of GREAT companies is that they get the “right people” on the bus, put them in the right seats, and get the WRONG people off the bus. 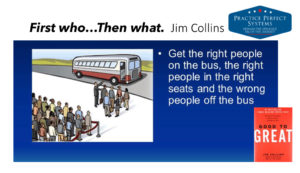 Too many practice leaders tolerate mediocrity. Be it a reluctance to be “carefrontational”, or a desire to be the “good guy”, it is an ultimately destructive, non-level 5 behavior and culture killer.

Sometimes, such mediocrity isn’t even noted because of a lack of objective performance indicators (OPI’s). What OPI’s do you have in place for each position on the bus, so you know how each seat is performing? Do your team members know their own OPI’s?

Lincoln had to fire his most popular Generals and a potential political rival, George B. McClellan during the war, knowing fully well that should his replacement fail, Lincoln would be blamed and lose the upcoming election. But Lincoln faced the harsh reality that winning the war was more important.

Lincoln measured the success or failure of the war (OPI’s) in terms of both land and dead bodies. He faced the harsh reality and made difficult decisions based on the ultimate goal of stopping the bloodshed.

Stories abound of long-term, “valued” employees who, are kept despite troublesome attributes or questionable performance. It’s as if longevity is an end, in and of itself, and is a value. It is not. It is a poison pill that when swallowed, can suck the air out of the entire office. Certainly, it’s a productivity killer and an outcomes suppressor.

Surviving a crisis might depend on whether your practice has a Level 5 leader who can make some hard choices.

Do you have the culture of your dreams or are you settling?

To your leadership and success by design,
Michael

P.S. Need help with your practice culture? Get The Resource Here!