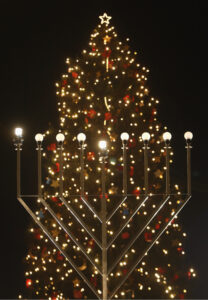 Despite their proximity in the calendar, it’s not the Jewish version of Christmas.  It’s more like Passover, as it celebrates a victory over oppression and regaining FREEDOM, something that seems to be a recurring theme in the Jewish experience.

On Passover, we commemorate the deliverance of the Israelites from Egyptian slavery(13th Century BCE).  On Chanukah, it was a military victory over the Syrian-Greeks (Seleucids) who governed the land of the Jews (Judea) at the time (164 BCE).  In his quest to promote Hellenism (Greek culture), King Antiochus IV Epiphanes outlawed most Jewish religious rituals, among them, keeping kosher, circumcision, and worship in the Jerusalem Temple, which included the daily lighting of the olive oil-burning Candelabra (Menorah).  The actual Temple’s Menorah can be seen today in Rome, depicted on the Arch of Titus in the Forum, as it is being carried in a triumphant marchafter the sacking of Jerusalem in 70 AD.

Chanukah, also known as the “Festival of Lights”, shares a tradition with Christmas in the use of illumination to publicize their messages.  And while Christmas celebrates the birth of Jesus (4-6 BCE), described by John the Apostle as “the light has come into the world” (John 3:19)

2 millennium later, Jews and others are still being persecuted, oppressed, and repressedfor their heritage and faith.  The message of Chanukah is as relevant today as it was in the second century BCE, when the Maccabees miraculously defeated the Syrian-Greeks and regained their FREEDOM.

The power of light to bring attention to such injustices is as relevant today as it ever was.  Light is associated with truth.  It’s the message behind the symbol we never pay much attention to on the dollar bill.

As the symbol suggests, the eye sees best when light is present.  So, as we celebrate Chanukah and Christmas with festive light, let us also use the light at our command to expose all forms of injustice.

“For everyone who does wicked things hates the light and does not come to the light, lest his works should be exposed.”

As we celebrate and prepare to enter a new year, let’s look back with gratitude and forward with illumination.  Gratitude that we are as fortunate as we are to live in the greatest nation on this planet and for the many bounties we enjoy.  Let us also shine the light on the misfortunes of others and commit to doing all in our power to help fulfill the dream of our Founding Fathers of “Novus Ordo Seclorum”; A New Order of the Ages.

There’s much hope for such a “New Order” when you shine the light in the right places.  This past week, US scientists from the DOE National Laboratory, announced that for the first time they achieved a net positive energy nuclear fusion reaction.  This future–changing breakthrough was overshadowed by financial and other bad news.  Bad news sells.  But nuclear fusion is the holy grail of energy production and promises to change our lives in unimaginable ways.

Let’s end 2022 by focusing on the positive.  Indeed, we are living in interesting times.  But if you’re reading this, you’re alive.  And the prospect of a better tomorrow depends on where you choose to shine your light.

May the lights of Chanukah and spirit of Christmas shine upon all mankind towards a brighter tomorrow,